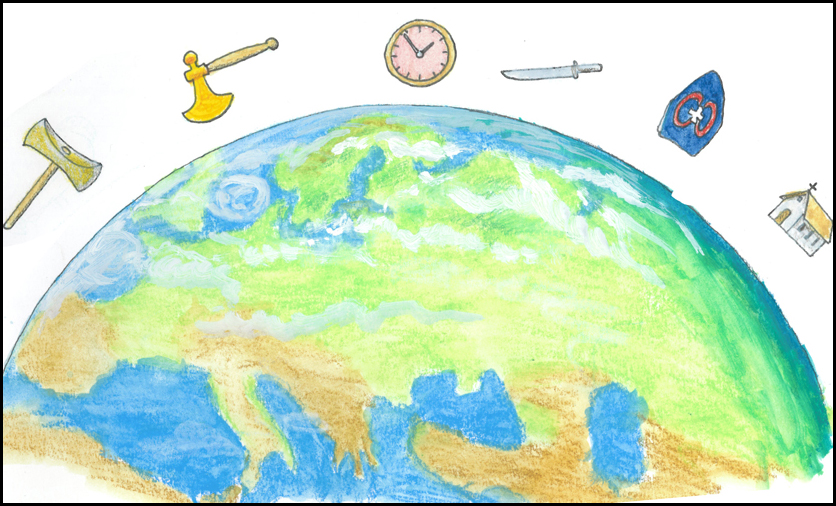 Chronology is the cornerstone of any archaeological interpretation because it brings into focus the social and cultural context of past human activity.

Archaeology relies on relative and absolute dating methods such as stratigraphy, typology, radiocarbon dating and dendrochronology.

Stratigraphic dating methods are based on the fact that layers and deposits on an archaeological site are formed in a chronological order and this usually means that lower layers represent earlier time frames than later ones. However cuts and pits that have been dug into the layers at different times will make straight-forward chronological interpretations problematic. Therefore the application of careful archaeological and excavation techniques and analyses have to be made before a stratigraphic chronological interpretation can be applied.

Typological dating methods are based on the premise that material culture changes gradually through time. Artifact types that have no practical function – such as decorative objects – are usually preferred for such analyses since they tend to change faster between epochs. For some periods relative dating methods will be superior to absolute methods because of their higher resolution.

Radiocarbon dating is the most reliable and widely used scientific method for determining the age of a carbon-containing substance formed over the past 50,000 years. The method works from the observation that the chemical element, radiocarbon (14C), is absorbed and fixed into organisms during their lifespans, and decays at a constant rate over time after their biological death. The decay rate can be counted and an age can be determined for when the organism died, that is, when the organism stopped absorbing radiocarbon from the environment.

Carbon is incorporated in living organisms from the food they eat. Animals will use incorporated carbon in the production of structural proteins such as keratin (present in hair, horns, nails, claws, hooves, feathers, and beaks), collagen (present in bone and tooth dentine), and also in the formation of exoskeletons (e.g., reptile shells, shells in snails, bivalves and other molluscans). This is useful for archaeological research because, once formed, these structural proteins retain the isotopic record (14C, 13C, 12C, among other elements) of that moment in time, and many of these structures survive relatively well in archaeological contexts.

Articulated skeletal bones are among the most reliable category of samples for radiocarbon dating. Other samples of short-lived species, such as seeds, are also preferentially used, as long as the archaeological context is securely related to the human activity we want to date and study.

Radiocarbon dates may be reported as cal BCE (calibrated Before Common Era), BC. Another timescale may be used and is referred to as “cal BP” (Before Present, where Present is 1950 CE).

The consistent use of radiocarbon data combined with accurate stratigraphic data in archaeological contexts allows us to refine chronologies. This approach can provide solid evidence for when an activity occurred, and for how long, allowing more meaningful comparisons between past human populations.

The materials we work on within the ATLAS-program are all dated, and in most cases using several of the described techniques. Chronologies are usually the best way of putting a specific genetic signature into context (e.g. the genetic turn-over during the Neolithisation). This is also how we were able to stress the continuous contacts between Europe and Anatolia, in both directions and all through the Neoltithics. Of equal importance is the context. The date will tie samples to specific contexts, a grave on Björkö for instance belongs to the Viking age. Genetic analysis of the buried individual brought to light two X-chromosomes, suggesting person buried there was a woman.

We published new findings on the demographic history of ancient Scandinavians from the island Gotland. The publication can be found here. Our recent findings on the evolution of Scandinavians are nicely summarized in a video by the Knut and Alice Wallenberg Foundation. It is published in English and in Swedish. We met for an end-of-the-year ATLAS gathering in Nynäshamn. A short meeting summary can be found here. We published new data over summer. Please find our latest papers here. We have a new publication in Scientific Reports. We analyzed 41 complete mitochondrial genomes of ancient humans from North Asia and showed a pattern of long-term genetic continuity in the region. We further detected signatures of gene flow or population structure, altogether highlighting the complexity of human demographic history. The group had its annual retreat. This time we went to Gimo Hergård and some impressions from the meeting can be found here. Members of the ATLAS team were involved in a multidisciplinary study highlighting the temporal genetic changes caused by prehistoric migrations into Iberia. The analyses of ancient human remains shed light into the origin of farming life-style in the far west of Eurasia and showed surprising homogeneity in diet over time. The study is published ahead of print in PNAS. There is an open vacancy as Head of the SciLifeLab's National ancient DNA center. Please see the following job advert for more information. We just published new insights into Mesolithic Scandinavians in PLoS Biology. We confirmed two migration routes building the foundation of the diverse Mesolithic human population in Scandinavia and also identified loci that have been selected for in the process of adaptation to the Northern environment. A 3 episode TV show was broadcasted in Swedish television over Christmas, focusing on the life in the Iron ages in Scandinavia. Some of us have been directly involved and others contributed to the success of the show with their research. The show can be found here (in Swedish) and Anders commented on the show in his blog. Magdalena and others from the team published a new study in the Journal of Archaeological Science: Reports. The multidisciplinary study sheds new light in the genetic composition, the diet and culture of the Fennel beaker culture on Gotland. Happy new year to all of our team members, families, friends and collaborators. We published a new study in Current Biology investigating the origin of the aboriginal inhabitants of the Canary Islands (Guanche). By leveraging genomes of 11 ancient Guanche individuals we showed a close relationship of them to extant Northwest Africans and leaving up to 30% of genomic ancestry in today’s Canary islanders. The team has uncovered a fearsome Viking warrior to be in fact a woman, who held a high rank among Viking warriors. The original investigation appeared in American Journal of Physical Anthropology and a Science news cover can be found here. Uppsala University released a press report. The story was also picked up by international news agencies. The sequencing data (.bam) used in our study is available at the European Nucleotide Archive with the accession number: PRJEB22507 Torsten and Mattias reviewed the effect of demographic events on the genomes of ancient Europeans. The paper is upcoming in Current Opinions in Genetics and Development Congratulations! On 5th of October the Knut and Alice Wallenberg Foundation announced this year's awardees.

Mattias, Jan and Anders secured a prestigious grant from the Knut and Alice Wallenberg Foundation. It is one of Sweden's  largest private foundations and supporting the team's research on 1,000 ancient genomes for the next 5 years.

The official announcement from the foundation can be found here.

Uppsala University has released a statement that can be read (in Swedish) here.

Some members of the ATLAS team were involved in a new study describing the demographic history of first farmers in Anatolia. The study was published in Current Biology

Emma, Arielle, Torsten and Mattias were involved in a study generating the mitochondrial genome of a 35,000 year old European allowing inferences about past migrations. The study appeared in Scientific Reports